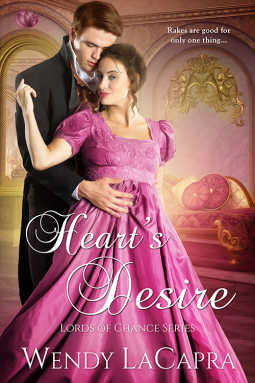 Lady Clarissa has decided to live life on her terms. After the end of a ten-year betrothal, she wants nothing to do with marriage or the men of the ton. Least of all her friend’s brother, the very charming Lord Markham, or Hearts, as many ladies call the oh-so-handsome earl.

Markham pursues relationships with no ties that bind. Acting the rake leaves everyone satisfied…until he overhears a wager that could lead to Clarissa’s ruin. He can’t help but step in and claim she’s his intended bride.

Clarissa is appalled. She did not need to be saved. Reluctantly, she agrees to the fake courtship, if only to experience what the rakish Markham can offer. But when lust becomes love, Clarissa must make up her own terms and bet it all on Hearts.

Each book in the Lords of Chance series is STANDALONE:
* Scandal in Spades
* Heart’s Desire

This is the first book I have read by Wendy LaCapra and let me just put it out there in the bookiverse that after this one book I am a fan!!!  This is also the first Historical Romance book I have read where our leading lady is a total alpha in the bedroom.  It was so exciting!!!!  I love that this author was not afraid to allow her heroine to be sexually demanding, that is something you almost NEVER see in the H.R. genre.  I will be buying this book and adding it to my book shelf so I can read it over and over again.

Percival Stanley, the fifth Earl of Markham also known by the ton as “Hearts” finds himself breaking all of his self-imposed rules in an attempt to save the reputation and honor of a woman.  Too bad it’s the only woman in the ton who clearly dislikes him and would rather risk ruination than go along with his scheme.  Or is she?

Just when Lady Clarissa Laithe thinks she has won her freedom by offending a notorious bully and gossip thusly choosing to become a spinster, the one man she finds “intolerable” takes it all awake in a misguided attempt to rescue her from humiliation and scandal.   It’s only after conceding to go along with his scheme that she see maybe he isn’t as intolerable as she thought.

I enjoyed this book so much and cant wait to hear what all of you think about it. 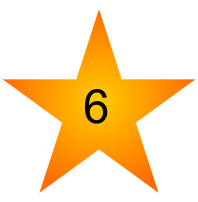