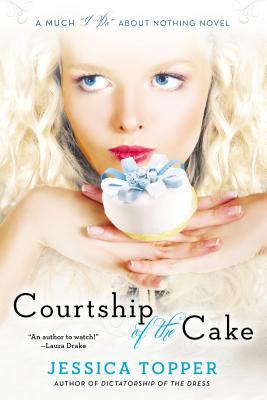 “Always a bridesmaid, never a bride” has suited Danica James just fine…until the mysterious man who crashed her sister’s wedding steals her heart, leaves a slice of groom’s cake under her pillow, and then disappears. Hoping to forget her unforgettable fling, Dani takes a job as a backstage masseuse for a rock music festival, not expecting the tour’s headlining bad boy to make an offer she can’t refuse. Nash Drama needs a fiancée—and fast…
Mick Spencer is the best wedding cake designer in New Hope and the town’s most eligible bachelor. But despite the bevy of bridesmaids he’s sampled, Mick can’t get the evening he spent with Dani out of his mind.
So when she shows up for a cake tasting at the Night Kitchen—with his former best friend’s ring on her finger—Mick vows to charm the woman of his dreams into choosing a sweet and sinful ever after, with him…

Let’s begin with I do not think there will be any book that Jessica Topper will write that I will not love due to the simple fact that her writing and character development is amazing.  I love, love, loved Dictatorship of the Dress and have fallen in love with Laney and Noah.  Now Dani, Mick, Bear and Angie have joined the family.

As someone who has lived the event, losing your self in others due to a heart wrenching and life defining event, the going through people to qualify yourself in your eyes as meaning something, and being worthwhile to someone, I can relate to the choices that Dani has made.  Being lost in something as fantastic as a music festival and being singled out by one of the headliners, I would have totally jumped on that bandwagon.  I love that she confronted her past by letting in her best friend and took steps to get past it, this was more than I have ever done, and in the end it let her return to Mick as a new person ready to embrace love, romance, and togetherness in a long term way that she has not before.

I enjoyed the relations, innuendo, and sexual tension that build between Mick and Dani.  His comments, staying close to her, the thoughtfulness he puts into doing things with and for her; her description of coming in on him cooking shirtless, barefoot, and only in jeans is hot!  Even with this, there is no real action or interaction between the characters until the end.  But that ending, Mick was there and ready; he did not give Dani the chance to get cold feet, he showed here just what to look forward to being together.

I love this book, the author, and the way it is written.