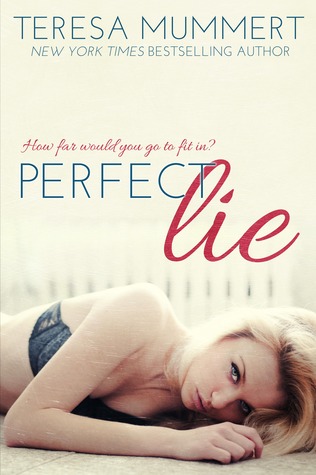 I was really excited to read this book, because it seemed mysterious and the tagline got me hooked:

I should have known that Teresa always seems to write a twist or have something other going on in the story besides the love developing with two characters and this one was NO different!  White Trash Beautiful gutted me and Safe Word was SO not what I expected. Delilah (lie) was a girl who was dealt the sort end of the stick for most of her life, but after tragedy she up and moves to FL, (Orlando my hometown) and starts over, pretending to be someone she is not, basically living a Lie(nice play on words). I had so many mixed emotions about this book, I Loved the fact that I did empathize with Lie, crying when she cried and laughing when she laughed. I also loved the witty banter between her and Abel, it was great to try to figure him out right along with Delilah. Able is just the right amount of sexy and mysterious and dangerous.

“I’m only going to say this once, if you ever come near Delilah again, I’ll make beating you took over **** look like a fucking birthday party.”

I was confused on some parts that were either looked over or not mentioned or just plan forgotten and it was starting to get to me until, UNTIL the end. I will just tell you this now the ending has the biggest shocker that I have seen in a while in this book. I would love to tell you what it reminds me of but then I’m afraid that would be giving it away. I was neither prepared for nor was I willing to accept it when I found out.  My first initial reaction was

It is the ending that got me to give this book the 4 stars that I did, because as I was near the ending I was very certain it was going to be a second book, because no way call all this be wrapped up nice and neat in the few chapters that I have left, but Teresa did such an amazing job at weaving this story so that you NEVER SEE IT COMING and when you go back and read it(and you will) you will see the little clues and hints that were missed or that this reader mistook for inconsistencies.  Well done Teresa, well done.

“I was a Russian spy at the ripe age of thirteen, given my uncanny ability to tell if someone was lying ( I also read fortunes on the weekends). By sixteen I had become too much of a handful for the Lethal Intelligence Ensemble (L.I.E.). I was quickly exiled to the south of France where I worked with wayward elephants in the Circus of Roaming Animals and People (C.R.A.P.). I was able to make ends meet by selling my organs on the black market for pocket change and beer money. At the age of twenty-three I decided to expand my horizons and become a blackjack dealer in Ireland. I loved the family atmosphere at Barney’s Underground Liquor Lounge (B.U.L.L.). People couldn’t resist the allure of Liquor up front and poker in the rear. Eventually I became tired of the rear and headed off to the United States to try my hand at tall tales. That is what brings us here today. If you have a moment I’d like to tell you a story.

(This bio is not to be taken seriously under any circumstance.)

Teresa Mummert is an army wife and mother whose passion in life is writing. She is the author of the New York Times and USA  novels White Trash Beautiful and Suicide Note. Born in Pennsylvania, she lived a small town life before following her husband’s military career to Louisiana and Georgia. Check out her website for samples and updates! TeresaMummert.com”