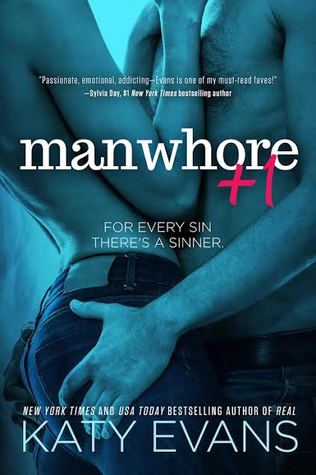 Malcolm Saint was an assignment. A story. A beautiful, difficult man I was supposed to uncover for a racy exposé.

I intended to reveal him, his secrets, his lifestyle—not let him reveal me. But my head was overtaken by my heart and suddenly nothing could stop me from falling. I fell for him, and I fell hard.

Now that the assignment is over, Saint wants something from me–something unexpected–and I want this wicked playboy’s heart. But how can I prove to the man who trusts no one that I’m worthy of becoming his plus one?

She left me and thousands of others hanging, literally on a ding!

After that last book I fell in love with Malcolm Saint and Rachel Livingston..they made THE perfect couple. But then katy had to go and mess with my emotions in that final chapter of Manwhore, and I waited on bated breathe to find out what happened and when I tell you Katy not only appeased me but she also made me fall, if possible, even more in love with Mr. Saint!

Rachel and Saint are are at a empas and Rachel will do anything to change that at any cost. She’s stuck at Edge and everyone knows what she did and how she feels and that is making her a target in someone’s eyes and her ties or lack there of to Saint is making it hard for her to try and move on.

katy did what she does best and gave a great mixture of romantic, sensual and toe-curlingly sexy all delivered in a nice Alpha male, smoldering hot package called Malcolm Saint. If I thought that highlighting my book would be the BIGGEST sacrilege ever I would highlight the ENTIRE thing! Saint said some of the BEST lines!

I thought that Manwhore was about Rachel and Malcolm’s budding relationship but I was wrong, Mawhore +1 goes deeper into their relationship and pushes themselves to the limit and test their boundaries with themselves and eachother.I keep thinking Katy can never top Remy or even Mackenna(my two personal fav of katy’s men) but again, she has proved me WRONG!

Malcolm is just…there are no words for him, perfect just seems to..simple for someone as grand as him. Mawhore+1 exceeded my expectationsso much so I read almost half of the book in one setting causing me to be delirious for work the next day, but it was alllllll worth it! I can’t wait to see what she has in store for the rest of the ‘gang’, especially Tahoe and Gina, cause there is a hot and steamy story there, and the HEA she has(hopefully) planned for Saint and Rachel.

as always, Katy is a beast and I absolutely can not wait to see what she has in store for the literary world next!