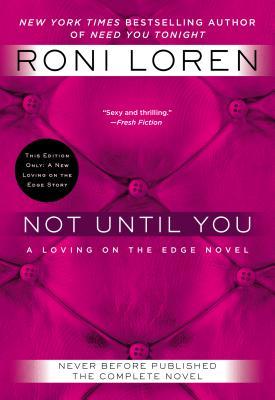 Cela knows how to be good. She’s had a lifetime of practice. But on the night of her college graduation, she decides she’s earned one wild night before she has to move back home to her overprotective family. So when the hot neighbor she’s been quietly fantasizing about for a year suggests a game of Never Have I Ever, she’s ready. But what starts out as a simple game takes an unexpected turn. Because Ian Foster doesn’t play games he can’t win.

Foster knows his desires aren’t for the faint of heart, especially not for someone as sweet and innocent as his pretty neighbor. But when Cela shows up at his door with an invitation that surprises him, he can’t resist indulging. Cela has no idea what she’s in for. The secret dark side of this man’s need will both intrigue and terrify her. But Cela has a secret of her own—and a new game to see just how far they’re both willing to go, and how much they’re willing to risk by crossing every boundary of desire.

“Never have I ever…

Had a one night stand.

Lived out a fantasy.

Slept with the hot neighbors I’ve been crushing on for a year.

But I want to…

It all started with a big ass bottle of tequila, a shy and focused recent college grad and two hot neighbors. What is it about Tequila that give you the courage to do things you have always wanted to do? And what better excuse than the I-just-graduated-from-college-I-want-to-do-let-go-before-I-begin-my-boring-life excuse? It’s a perfect way for Cela to catch up on all the wildness she was supposed to have in college and didn’t because she was too focused on her studies.

So right off the bat I loved Foster, there was something about him that I was just drawn to, maybe I could sense the tortured soul underneath all that Master stuff. It took me a while to warm up to Cela and that’s maybe because I never read the previous books. Although this book is a spin off from Loren’s other series it may have still helped me to be a little acquainted with her first she just didn’t touch me like Foster did. The book is in a kind of duel POV that was a little hard to follow at first but after a few chapters it was hardly noticed.

I thought this book was going for a cliché love triangles especially after a night out at the club leads all three of them to a hotel for the night. And I cannot, I repeat, cannot stand love triangles! But it’s clear even from minute one that Cela has interest in one person and one person only. While I loved Foster, he did confuse me at first, he was how old and how successful and STILL had a roommate? Why?! That all became apparent to me as I further read. And while I found this to be a hot read, I did find it to drag for me and it was hard to get through those parts. I felt that if the book was 100 pages lighter than it would have gotten a better response from me. I still enjoyed it and would totally read more by this Author if given the chance.