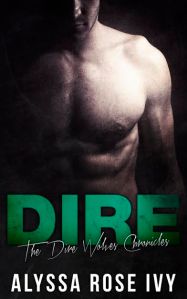 A single howl made me stop short. “The wolves!”

“Let’s hope they are farther away than they sound.” Gage tightened his hold on my hand and pulled me forward.

We picked up the pace, and I chanced a glance behind me. That was a mistake. Several large grey wolves came into view. “Run!”

Gage didn’t need to be told twice. He broke into a run without letting go of my hand.

I ran as fast as possible over the frozen snow, but we didn’t get far before the wolves started circling around us. “Oh my god.” Could things get any worse?

“You have to make a run for it.” Gage’s voice quivered. “They’re going to kill us.”

“I’m not leaving you.” I tried to stay strong, and I kept my eyes locked on the wolves. There were five of them. All of them were massive, much larger than any wolf I’d seen before, but one of them was even bigger and had a large silver streak running down its back. That wolf seemed to be staring right at me.

I spotted an opening next to one of the smaller of the wolves and went for it. I didn’t make it far before one of the wolves stepped in front of me. I froze, paralyzed with fear, before my legs were knocked from under me. Suddenly, I was lying in the snow with a giant wolf hovering over me.

“We’re fucked.” Gage voiced exactly what I was thinking.

The silver streaked wolf stared down at me. It’s almost glowing eyes bored into mine. Was I really going to die as half-frozen food for a giant wild animal?

Then things got hazy and the air seemed to buzz. Moments later it wasn’t a wolf on top of me—it was a man. A completely naked man with a faint scar across his face.

“What the heck?” I tried to scurry back, but Hunter didn’t move. His very exposed parts nearly touched me. I didn’t want to notice his size, but I did. He was huge. He also didn’t look remotely concerned with the cold.

His lips brushed against my ear. “Were you going somewhere?”

Gage was the first guy I ever wanted. He was my first crush and my first fantasy, but he wasn’t my first in any other way because he never saw me as anything more than a friend— at least not until the night that changed everything.

It was all Gage’s fault. He insisted we drive through the storm and take the back roads. By the time the storm hit full force we had no chance. One night of snowbound sex changed our relationship forever. The problem was at the same time I caught another guy’s attention. This other guy happened to be the alpha of a pack of shifter wolves. I thought the wolves were the worst of my problems, but I was wrong. When things went from bad to worse I had to make a lifelong sacrifice to save Gage, but what price is too much to save the one you love? 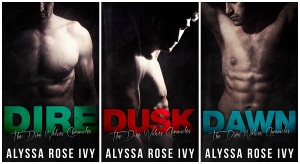 Alyssa Rose Ivy is a New Adult and Young Adult author who loves to weave stories with romance and a southern setting. Although raised in the New York area, she fell in love with the South after moving to New Orleans for college. After years as a perpetual student, she turned back to her creative side and decided to write. She lives in North Carolina with her husband and two young children, and she can usually be found with a cup of coffee in her hand.