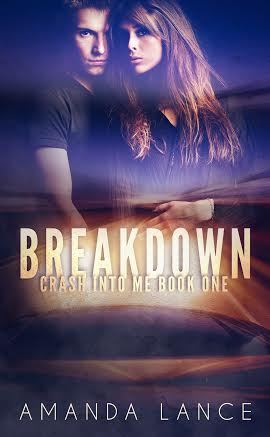 Charlotte Ferro is about to jump.

Yet nothing ruins a perfectly good suicide attempt worse than a handsome do-gooder. After William O’Reilly convinces her to take one last ride with him, Charlotte finds herself forgetting about her own problems and enjoying a world of which she never dreamed.

Now addicted to the rush of fast cars and cool criminals, Charlotte finds herself leaning less towards the ledge and more toward the arms of her savior. But with reasons of his own for keeping Charlotte safe from herself, William is reluctant to involve her in his criminal undertakings. Will his career choice keep them apart? Will Charlotte’s painful past?

When I first got Breakdown, I was in the midst of treading two other books and knew that it was going to go after those. I wasn’t familiar with this author, who contacted me personally and I usually read up until the first chapter of each book I’m going to review and then stop, but with Breakdown, I didn’t stop. It was beautifully written and I really felt the sadness of the main character.

‘Jumper’, is done with life, she sets out this critically detailed plan to kill herself by jumping off the bridge, knowing that if the fall won’t kill her, then her getting hit by an oncoming car or truck will and she’s okay with that.  She sets out and has literally one foot on the edge when she is approached by  ‘doo-gooder’ who senses that he might be the one thing between life and death for this young lady who has clearly given up on life.

In an effort to save her life, he takes her to an underground racing circuit and unknowing gives her something to live for, the rush of racing. And soon she has found something or someone who takes her mind off all the doom and gloom and what drove her to what she felt was her last resort.

This story was a unique one and it showed the loneliness of the MC so well that I was depressed with her! I would have liked to see the main reason behind her wanting to kill herself. Although it’s alluded to an incident that happened I would have liked to delve into that more. We get a lot more of William’s sister back story than we do  Charlotte’s, and I made the connections but maybe others won’t. I also loved the secondary characters and would love to hear more of their story, maybe another book(hopefully?). All in all it was a great read and If the author had more about these characters I would definitely read them.(Hint-Hint)