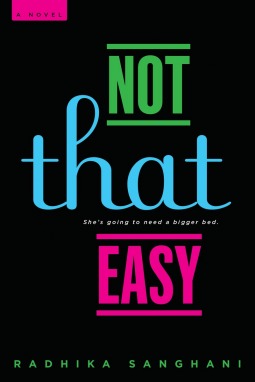 Ellie used to be a virgin, but now she’s a woman with sexual experience. Well, some sexual experience. She also has debt, an unpaid magazine internship, and three flatmates who left her with the single room to match her single status.

That’s okay. She doesn’t want a boyfriend anyway—she wants several. And if the sex is exciting enough, her ruthless magazine editor boss can exploit her dating life for a column.

After countless hook-ups, a disastrously fiery encounter with some heat lube, and one orgasm class, Ellie is faced with the sad reality of her sexual ineptitude. But when she starts to witness the emotional wreckage she’s leaving in her wake, Ellie realizes that sex can be hard, and there’s a down side to giving it up too easy.

Not That Easy was a fun book to read.  It had an entertaining social aspect that will make good conversation at parties or for game night.  Ellie had some face palm moments that made me groan to think of a grown woman making these comments or choices.  She definitely lucked out in some aspect, I won’t embellish so I won’t reveal too many spoilers, but all in all, she definitely came out on top; bah dum tsssh. I did think that some of the things that happened to her were not that believable,( I mean i’ve heard of unlucky, but come on!)but once I looked past that it became a fun fall read!  I also want to give a big high five to Radhika Sanghani on her editing.  I have had too many books lately that have not see the light of spell check.