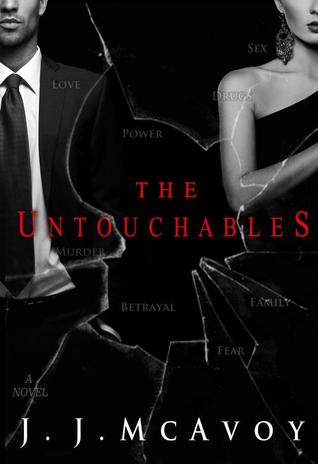 When I first got Ruthless people, I was thrown off because never had a read of a hard as balls female who was a mafia leader and held her $hit as much as Melody. It was always the ruthless men and the women who were somewhat hard, but always gave the men the control in the end. Slap my face and call me a rat when Mel was all boss bitch, literally.

It floored me and I was instantly in love and couldn’t wait for The Untouchables. Melody and Liam were such a unstoppable and powerful couple you can’t help but want to know about their lives and what they are doing at every minute of every day! JJ McAvoy did not disappoint in this second instalment with all the twist and turns with not just Mel but with the whole Callahan clan!  When we last left them in Ruthless People, they were recovering from a horrible loss and blow to the family and finding out secrets that would shock Mel to her core.

The Unstoppables picked right back up where all that action left off, with Mel and Liam’s bond stronger than ever and a new threat, not only from outside forces but from someone in their inner circle! The nerve! Does that person who is betraying them value their lives that less, because if there were ever a fictional character I would never want to cross it’d be Mel, on a good day!

There was parts in the book, like in any good mafia book where I wanted to climb in the fictional word myself and yell at the MC or the person who was low-key betraying them and yell, “Look, its this bitch right here, kill her! KILL HER!” but I just had to settle with screaming this out loud and scaring the crap out of my kid.

I’d like to call this book the calm before the storm, because while there were defiantly things that happened that were shocking and WTF moments (especially the last chapter, it was the biggest, WTF moment) this was just the start of what I can only hope to be a climatic ending so explosive I’m sure I will have to call out of work the next day to recover from.

I have only ever truly read one or two Mafia series and this by far has been one of the best, Sex, Love, Money, Power, Blood, Death and Loyalty beyond belief is just a few things that littered the pages of The Unstoppables and I can’t wait for American Savages. J.J. McAvoy is one to look out for and I can’t wait to see what comes from her in the future.